“After a great blow, or crisis, after the first shock and then after the nerves have stopped screaming and twitching, you settle down to the new condition of things and feel that all possibility of change has been used up. You adjust yourself, and are sure that the new equilibrium is for eternity. . . But if anything is certain it is that no story is ever over.”
― Robert Penn Warren, All the King’s Men 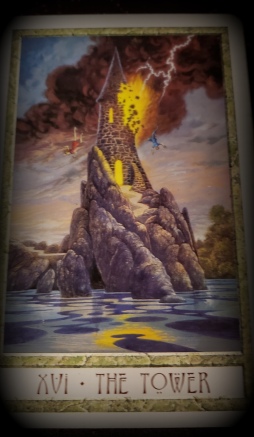 he Tower-change is a coming-blessed or be damned.  The Tower is a difficult card representing turmoil in our lives, there are no two ways about it.  We are trucking along thinking everything is going okay and ‘bam’ the Tower shows up, usually at the most inopportune times.  The Tower is generally known to mean danger or crisis is on its way as well as unforeseen change.  The Tower arrives to challenge the narrow structure that defines our lives or our security based on false beliefs about ourselves and our world.  It is a situation or occurrence sent to wake us up because up to this point nothing else has worked.

The major arcana cards are always an indication that our spirit is trying to speak with us…..the Tower is telling us that Spirits knocking has gone unheeded and will be ignored no more.

The Tower has always brought to mind the old stories of alchemists in the tower working furiously at magic, attempting to challenge currently held beliefs regarding the scientific order of things in the Universe as well as dabbling with otherworld energies for the wrong reasons.  The overstepping due to ignorance or ignoring the warning signs cause the Tower to explode sending everyone overboard.  Inner and outer realities collide with real-world consequences……what inner red flags have you been ignoring regarding what is right for your soul?