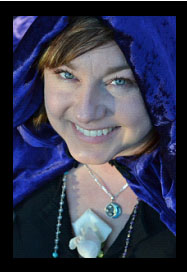 olly King is a mental health counselor, ordained minister, liminal ring-walker, author, artist, photographer, teacher and enchanted practitioner of the Old Ways. Wylde Witch by nature, Holly was introduced to the world of the fey by her mother Kathleen. This facilitated a life-long spiritual walk guided by Mother Nature and other-world experiences. She later she answered the call of the Lady and Lord in her 13th year and has been learning and practicing with intent for almost 30 years. Holly’s magical style has been heavily influenced in the honoring common threads of her ancestral blood lines of Celtic Scotch-Irish, Cherokee and Austrian Heathenism. Holly traveled as a solitary for many years with lateral education and work in reiki, plant medicine and tarot as taught by her mother, until her path led her to the Ivy Moon Coven in 1999 where she was instructed through traditional methods in Ceremonial Witchcraft and Isis Magic by Michael Le’Gare and Astraea Raine.

Holly is passionate about honoring connection with deity and nature, believing it is the highest form of pagan spiritual expression. Understanding the highly personalized nature of the spiritual journey, Holly strives to empower others in their spiritual walk through facilitation of soul recovery. By doing so, individuals reconnect with their essence and live a more authentic and spiritual life, thereby furthering the overall spiritual evolution of all beings of Gaia.

Holly holds a BA in Multi-Cultural Counseling with Alternative Healing Modalities. She is a Priestess in the Coven of Ivy Moon and Priestess of the Brotherhood of the Black Hills. She has taught classes on myth, ritual, spell working, augery, herbology, aromatherapy, devotional practices, craft history and ancestor worship. Holly currently resides with her son and husband in the Cascade foothills of PNW where she is working on her new book ‘Wytchborne’ and produces wyldecrafts for her business Euphoric Naturals & Apothecary, which she co-owns with her ring-walking partner Shadowmist Stewart. 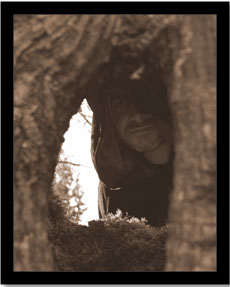 hadowmist Stewart is an artist, photographer, banking industry manager, network administrator, liminal ring-walker, yoga instructor and a seeker and practitioner of the Old Ways. Raised in the Baha’i faith, Shadowmist is a born empath and dream walker who has been developing his spiritual practice as guided by his Celtic Scotch-Irish ancestors at the age of 12. While on the farm, late at night, he would find himself looking up at the full moon and feeling the love from the Goddess overwhelm him.

Since his childhood, Shadowmist has traveled a varying path of spirituality.  Although his studies started with Witchcraft, he spent some confusing time through his adolescence in several forms of Christianity (girls will do that to a young man). On his way back to the Goddess he spent time studying the Kabbalah and higher magic through authors like Aleister Crowley, Eliphas Levi, and Gerald Gardner. Finally, after years of yoga, meditation and Native American Shamanic works, he quieted the noise of the world and found his inner self and his way back to his roots of a dream walking Shaman and Ceremonial Witchcraft.

Shadowmist believes there are multiple paths to the top of the mountain of spirituality. Through his own path he has found the appreciation of all walks and the importance of self discovery. Shadowmist finds it is paramount to be accepting and loving to all choices of spirituality even if it does not coincide with his own.  The only path that cannot be tolerated is the path of intolerance.

Shadowmist currently expresses his spiritual experiences through his artwork and written word. He acts as a mentor for pagans of multiple paths who face societal challenges. Shadowmist can be found sharing his journey with his liminal ring-walking partner Holly King, co-creating a path of enlightenment, peace and communal health through creating their wyldecrafts products for Euphoric Naturals & Apothecary.